When the Diagnosis Is ‘Dead Butt Syndrome’

By JEN A. MILLER 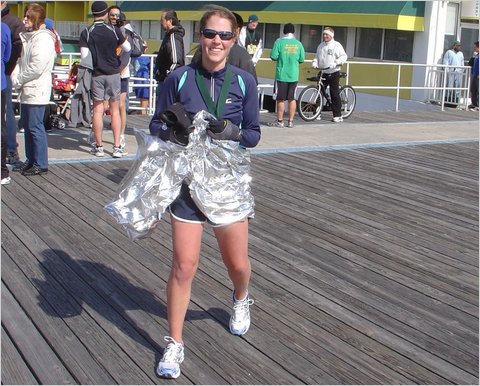 Jen Miller at the finish of the Ocean Drive 10 Miler in Wildwood, N.J.

My butt, unfortunately, is dead.

“Dead butt syndrome,” the sports medicine doctor said to me after making me go through a series of circus-act contortions that involved swiveling my hip in all directions. His voice was very serious, his tone stern. I wondered if I should start making funeral arrangements for my rear, maybe a New Orleans-style blowout parade?

Hold the tuba. My butt’s not really dead. It can’t be revived with defibrillator paddles, but it can be fixed.

The technical name of the condition I have is gluteus medius tendinosis — an inflammation of the tendons in the gluteus medius, one of three large muscles that make up the butt. It’s a very isolated and painful injury that knocked me out of marathon training in January with stabbing pains in my hip. It’s a symptom related to what running experts hammer at: the need for cross-training and strength training. I was running so much that I told myself I didn’t have time for the exercise machines or weights, so I have no one to blame but myself.

I’ve been running for five years, but I’d never heard of the problem. I ran it by a friend, a former track coach at the University of Pennsylvania, and he was baffled too. I haven’t seen any coverage, though the doctor said it’s fairly common with runners who train for half marathons and beyond. It took him five minutes to figure out the problem.

“A new thought in running medicine is that almost all lower extremity injuries, whether they involve your calf, your plantar fascia or your iliotibial band, are linked to the gluteus medius,” said Dr. Darrin Bright, a sports medicine physician with Riverside Methodist Hospital in Columbus, Ohio, and medical director of that city’s marathon. “In the last five to 10 years, we’ve just realized how much of an important role the gluteus medius plays in stabilizing the hips and the pelvis in running.”

If you think of the pelvis as a cup, the muscles that attach to it, including the three gluteal muscles and the lower abdominals, interact in an intricate choreography to keep the cup upright when you run or walk. If these muscles are strong, the cup stays in place with no pain. If one or more of those muscles is weak, the smaller muscles around the hip take on pressure they weren’t designed to bear.

The cup still stays up, but at a price. First come muscle tears and inflammation, followed by scar tissue in the muscle. If left untreated, this process becomes a cycle that keeps feeding into itself.

“For people who have persistent pain, it’s healing gone wrong,” Dr. Bright said. “That gluteus medius isn’t firing the way it’s supposed to. You’re getting an inhibition of the muscle fibers. It’s kind of dead.”

Some of us run through the pain, which is what I did. And many compensate by adjusting their strides in a way that impedes the gait and can lead to problems in the quads, hamstrings, Achilles tendons, heels, knees, calves, ankles, feet or toes.

“Whether they’re recreational weekend runners up to the elite marathoners, the majority of runners I see have weak gluteus medius and gluteus maximus muscles,” said Dr. David Webner, a sports medicine doctor at Crozer-Keystone Health System in Springfield, Pa.

For about 70 percent of his patients, physical therapy that stretches the muscles in the hip and leg and strengthens the gluteus muscles, along with a temporary reduction in the mileage and intensity of running, resolves the problem. Deep tissue massage, which sends more blood to the area to break up scar tissue, along with strength training may also help to break the cycle of inflammation and scarring.

More advanced approaches include ultrasound guided tenotomy, which uses ultrasound to identify the affected muscles and then “poke little holes in the area of the scar tissue,” Dr. Webner said, or platelet-rich plasma therapy, which involves injections of centrifuged blood products and is what Tiger Woods underwent after knee surgery last year.

Fortunately, I didn’t need to take it that far. I’m lucky — the pain has ebbed with physical therapy and changing one of my weekly runs to a cross-training workout.

“Those runners who do multiple types of exercising are less prone to have weakness than runners who do just running,” said Dr. Webner. “Triathletes who come into my office don’t have as much weakness as just solo runners.”

So I’m biking. I row. I sweat through elliptical workouts at the gym.

And I no longer have the feeling that a pin is stabbing my hip every time I drive. I can sit for more than a half hour without pain. And last month I ran the Amish Bird-in-Hand half marathon, and felt no more discomfort than you’d expect to endure running 13.1 miles through the hills of Pennsylvania Dutch country.

To keep my rear alive, I must be vigilant about continuing to strengthen my lower abdominal and gluteal muscles. Last week, I slacked off and the pain came creeping back.

Is it annoying to have to focus so much on these muscles to run? Absolutely. But if it’ll revive my butt, it’s worth every leg lift and crunch.

Jen A. Miller is the author of “The Jersey Shore: Atlantic City to Cape May.”